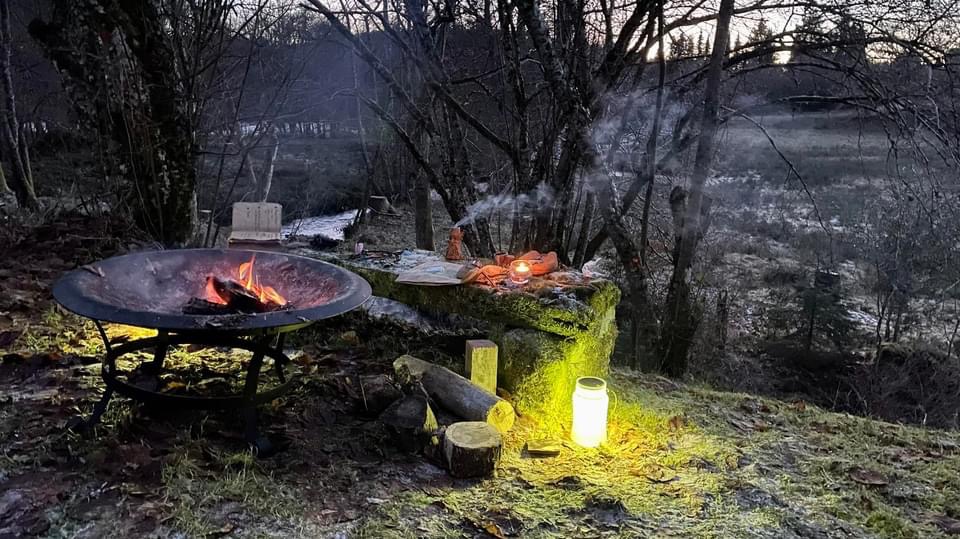 We arrived on 15 December just beating the France ban on people coming into France. We were very lucky again!

It was -4C and the water was frozen! We lit the lounge fire and Ritz deployed the hair dryer. We turned on all the taps. It was only when I turned on the bacon tap that there was a release of air and a slow dribble came through the kitchen. I was ready to contact the Mairie as I thought that there may be a burst pipe outside of the property as the water was not coming through the mains. But I was wrong. After an hour or so the taps were running.

We turned on the Laverie a few day later. Unfortunately, the shower bar had split so we had to go to Ussel to get a new one which we fitted relatively easy even after spotting a leak where the washer wasn’t seated properly.

We had a quiet Christmas. Ritz was doing a lot of thinking and planning and we both made action plans and had our annual family conference.

After Christmas the temperature shot up to 18C and we got stuck into to some trimming around the area. The broom on the top drive had got out of control so we spent several hours with the chainsaw cutting that back. We also logged up the oak at the plateau but couldn’t manage the large piece.  We had to buy another chain at the tractor shop as the chainsaw went through one wire. We managed to trim the hazel at both ends of the mill and even got permission from Jacques to trip the samplings at the front of the mill to make a good view from the decking in the summer.  i also removed a lot of broom from the back of the hot tub and garden area. There is still a but more to trim and we were disappointed that Nick the Tree didn’t allocate us any time to do some larger tree work. This will have to wait until spring now.

The river flooded again when there was a lot of rain but mostly it has been very cold going down to -8C at night, The quad has worked well and started first time.  We had a quad day trying to get it on the trailer. A bit of a failure as we didn’t bolt down the ramps to the trailer resulting in the RHS ramp slipping off and breaking the trailer tail light. We eventually managed to get it on the trailer by using the quad’s winch.  We bought a new trailer lamp cluster for €35 form the Loser Vert shop. This is a great shop that sells Still equipment and services all things garden including chainsaws. We spent a morning taking the mower carb apart and cleaning it. Not sure if it’s made any difference but it does work. Good enough for a spring start,

The only trip out we did was to Gueret for Christmas meal shopping including a Royal Wok.

It has been really cold this trip. A smattering of snow nearly stopped the van getting out but we managed it. Certainly no big snowfall. A high temperature over the new year period otherwise it has been cold.

We have worked out a log rotation. The plateau oak will be split in spring summer and brought in next winter. Otherwise I think we will be fine for at least next year maybe two.

The bird table was full of blue and great tits with marsh tits. Other visitors were chaffinches, gt spotted woodpeckers, nuthatch, blackbirds, jays, and a robin. It was great to see a crested tit in the hot tub hazels. He was also in the mill woods as was a wren and tree creeper.

We have captured boar, roe, red, fox and coypu on the trail cam at the campfire circle..

We have looked at the projects. I still can’t start the Folly project as the oak is still in the way. We are re-considering the tree house. We both think it will be more trouble than it will be worth so we might look at a cabin instead. This would be at an angle in the corner of the plateau, more or less under where the tree-house would go.

We had Joy and Barry as guests for dinner one night which was quite good fun. Rawdon is expected on Wednesday before we go.

A great trip. Cold, cold but a happy trip. I’m please to say I seem to have reconnected with the mill despite a couple of initial setbacks. it really is a special place and we are lucky to have it. I sometimes moan about the amount of work but it keeps me alive, it keeps me fit and keeps me motivated. Sometimes I just have to redefine what work and jobs are and take a breather if I need one. I love our mill!

Possible projects for the future include a cabin on the plateau, the folly, a stone circle and continuing with the pond.

We are going home via Orleans.