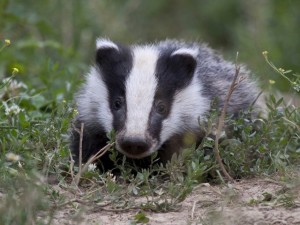 If you sit quietly anywhere on the property wildlife will soon come up to you – more out of curiosity.

You will find Fox, Badger and Red and Roe deer as transient species with Pine-martin, Beech- martin, Red squirrel, small rodents and even Wild-boar making appearances by leaving tracks and sign.

We are delighted to report evidence of Boar, Red and Roe deer during a tracking forays and we have seen a Beech marten (extinct in England) and Coypu captured on trail cam.

Our trail cam from January – May 2016 revealed six young boar crossing a trail. 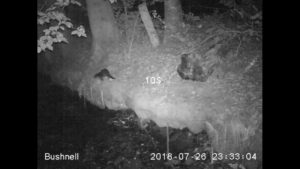 In the summer 2018 Pablo bumped into an otter and thought he was seeing things. A few days later the trail cam revealed he didn’t need his eyes testing!

A slightly frozen Salamander was also found on the lower drive in January and on a slightly warmer September day, a female Stag beetle did a few circuits around the garden and landed on my hand.

The area hosts a diverse selection of plant life with Wood sorrel, Campion, Herb robert, Herb bennet and Stitchwort to name just a few. In March 2016 we discovered European wood-sorrel and Dog’s-tooth violet.

We have also seen some rarities: a Mole cricket, a slow worm, glow-worms, and a leopard slug.

Bird life is also abundant with Black and Red kite, Buzzards, a Heron fishing at riverside camp, as well as a host of smaller birds including Crested tit (only seen in Scotland) Black redstart, Nuthatches and Green and Greater-spotted woodpeckers (so far).