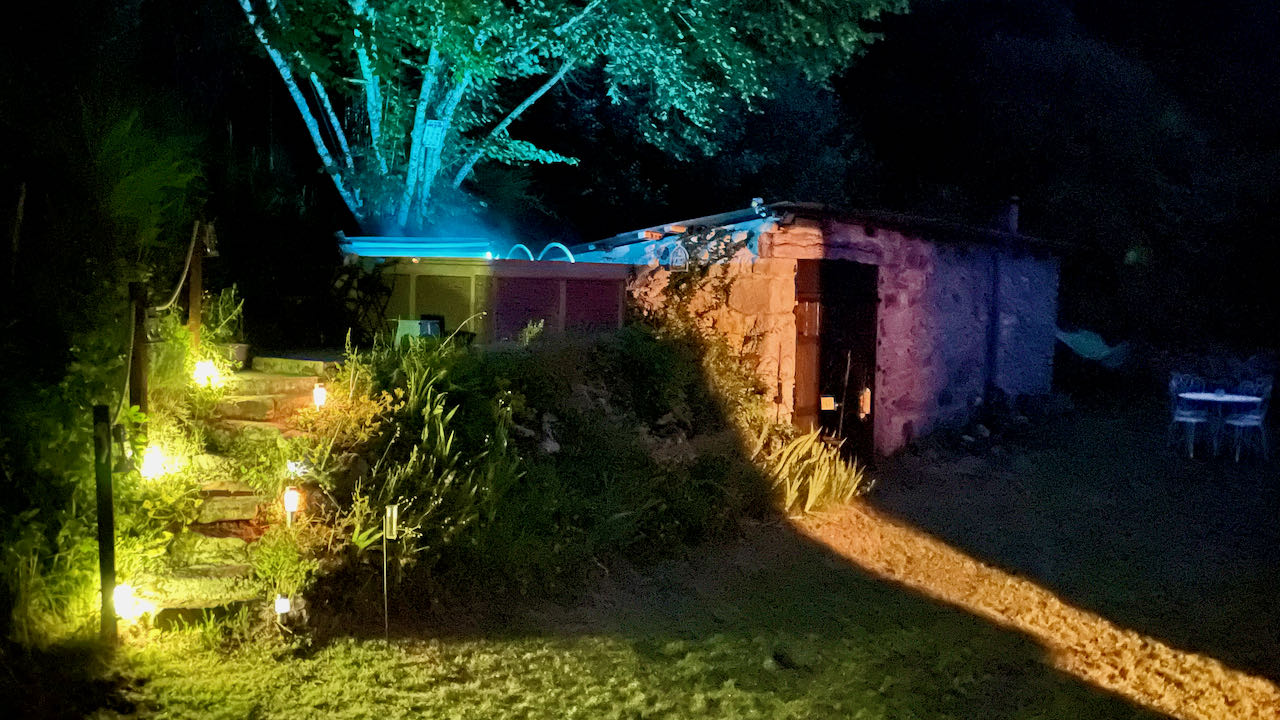 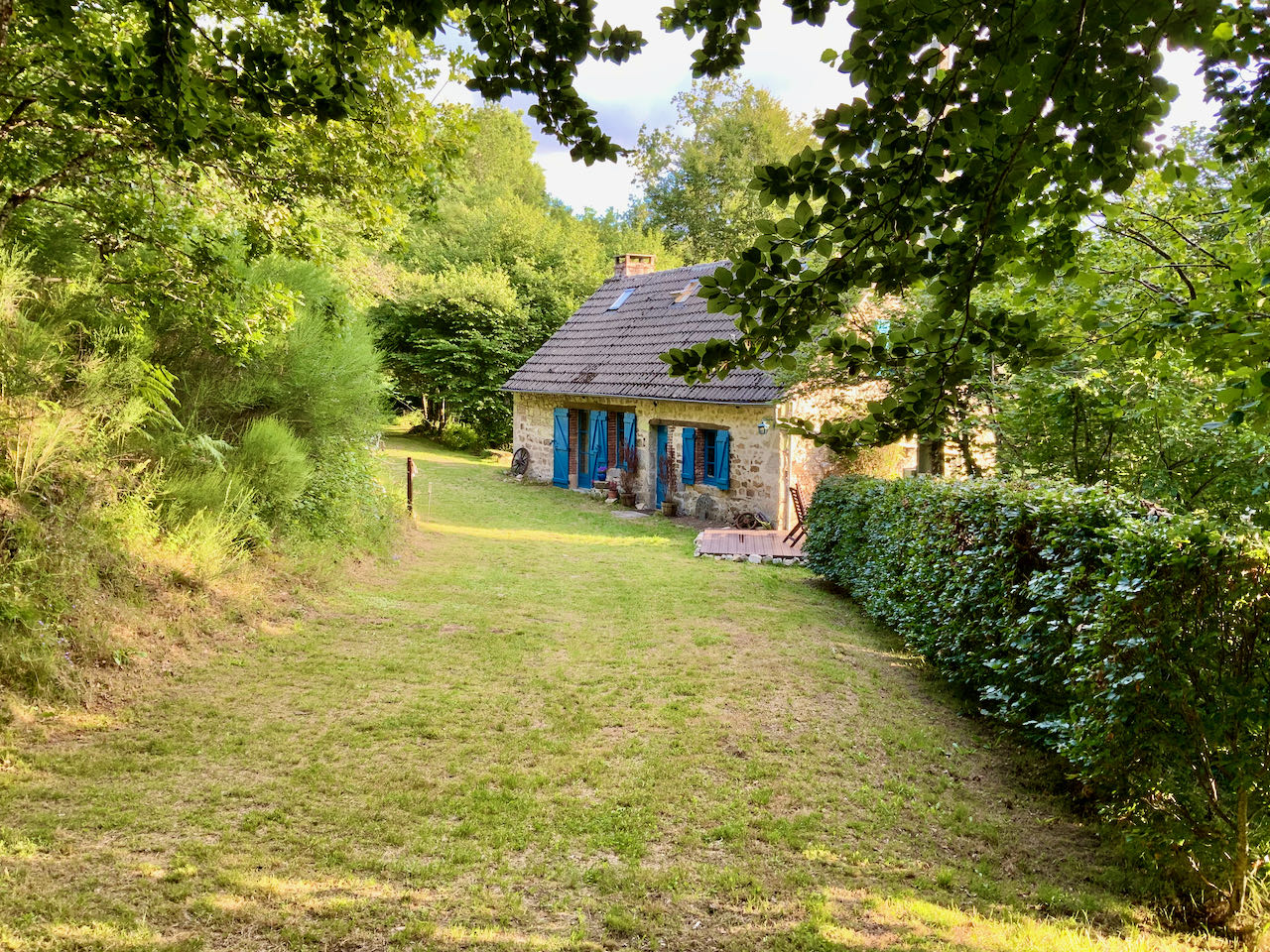 Lots of work this trip. 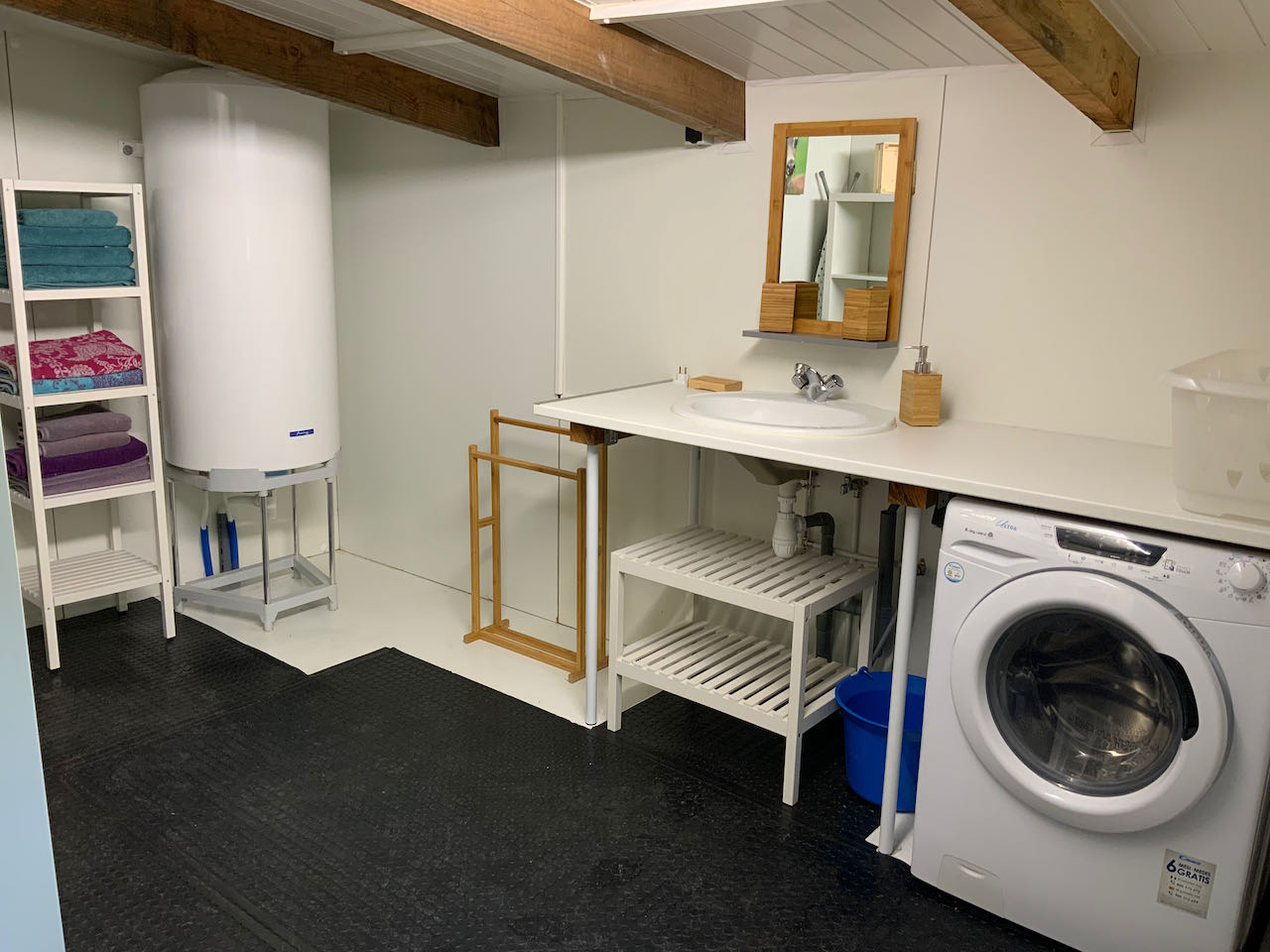 We finished off painting and laying the floor in the Laverie. We had to put down two coats for the interior doors and three for the outer steel doors. The washing machine vibrated too much in the winter so we bought a vibration mat. This seems to have worked. The whole Laverie was tested out by V&T who came to stay for 3-days. They found it a good extension of their tent at Cuckoo’s end and nothing needed changing except an additional broom. 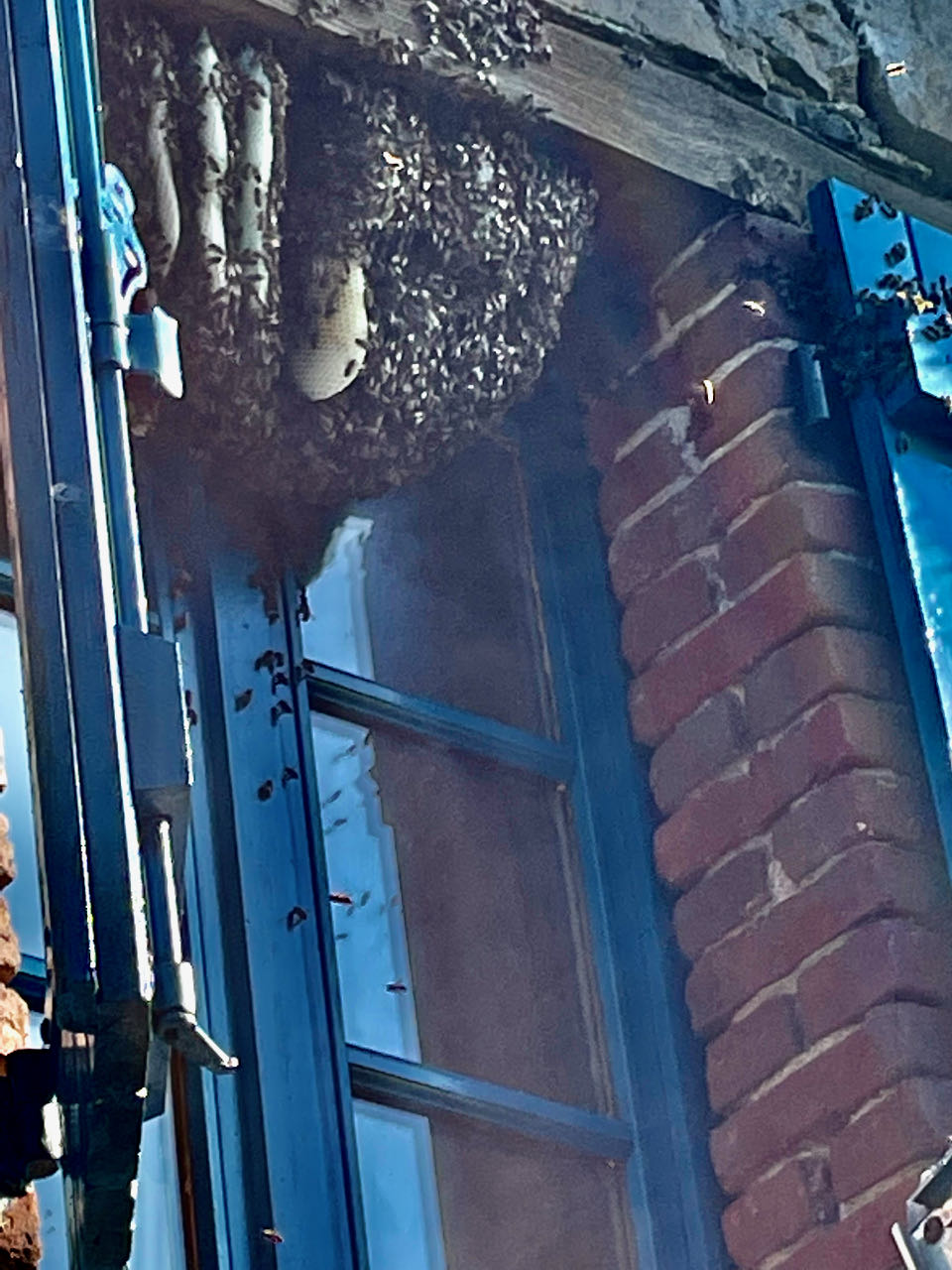 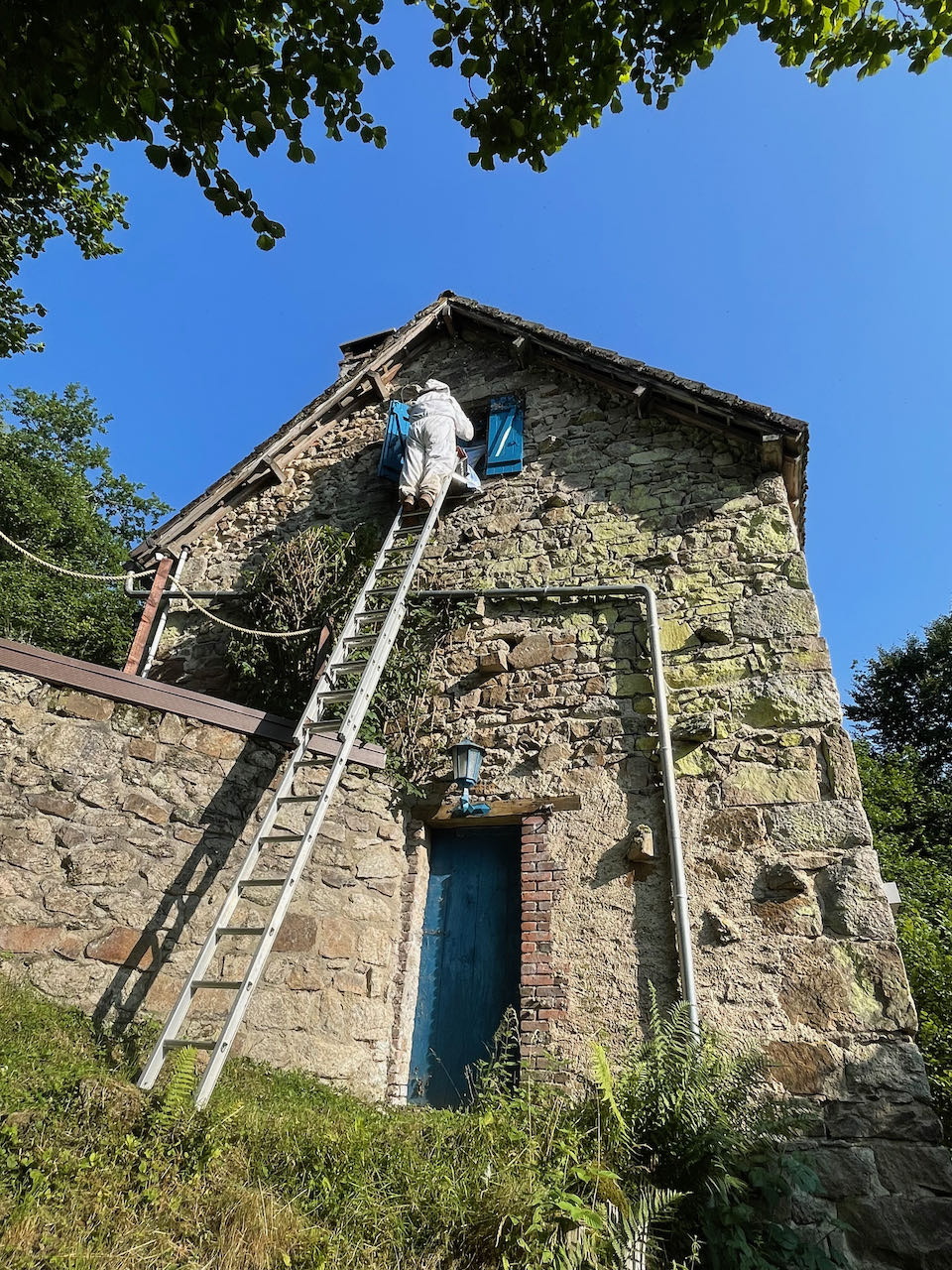 When we first arrived we opened up the shutters as normal. In the studio bedroom, Ritz opened up the curtain to see a swarm of bees and an obvious bees nest covering most of the two windows. This was a case of getting help and not dealing with it ourselves. The call went out and Nigel the Bee from Pontarion came to relocate them. He said that bees were in high demand and these would be taken immediately to a lady who had been waiting for two years for bees to be relocated to her hive. It took Nigel two our to get most of the bees in a box. It took another three days for all the bees to completely disperse from the window. 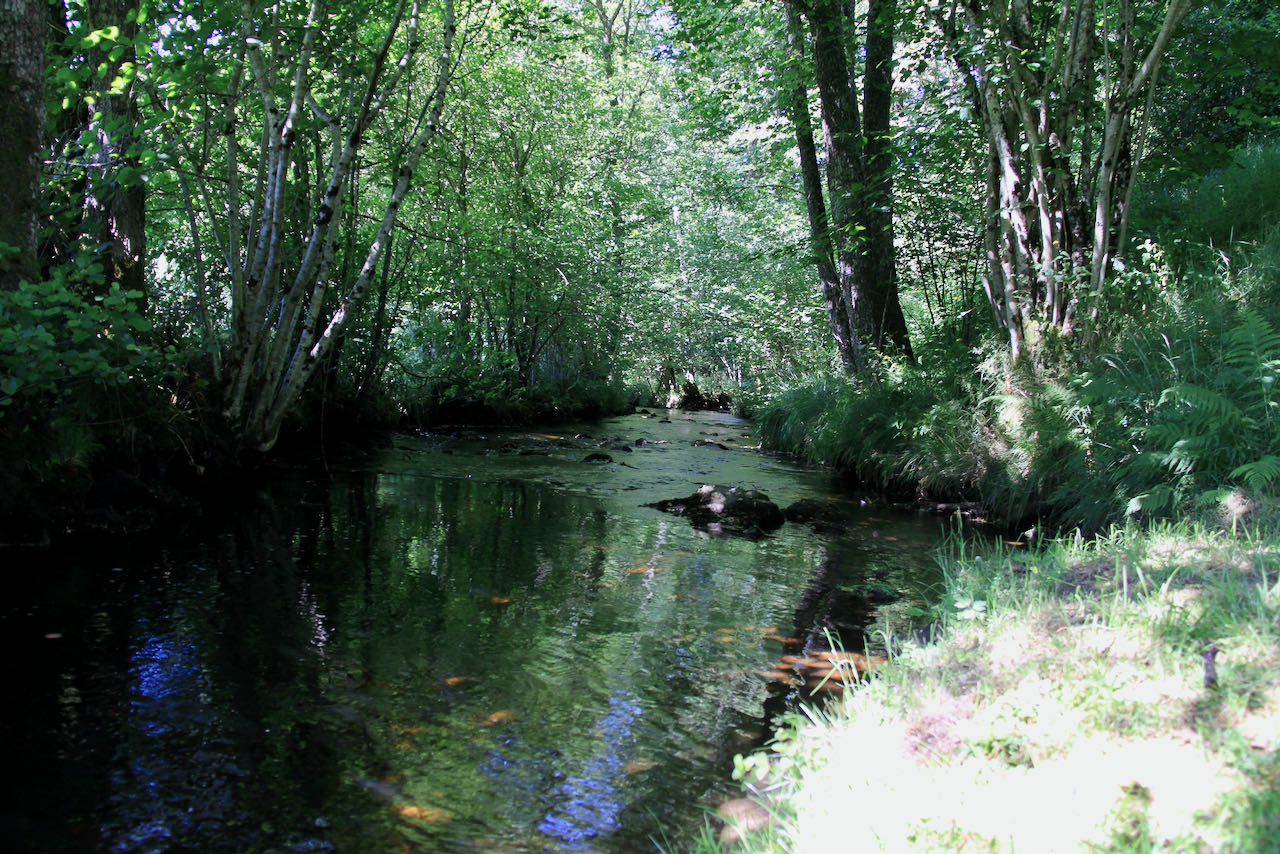 Everything has overgrown. Us not being here last summer and the work required in winter made everything a little overgrown. We now have Andy to help with mowing plus doing any other jobs in our absence.

The broom on the top drive is a mission and always will be.  We bought an accessory for the trimmer to help cut the broom. Definitely a plus as it went through the stems very easily. Need another accessory to grind down the roots for next year. A good half a days work strimming down the top drive.

Likewise – the rest of the land is sprouting a bit and needed trimming. We must do quite a lot in the winter to trim and prune and reduce or cut down some trees in the Mill woods to help open up the woods a bit. 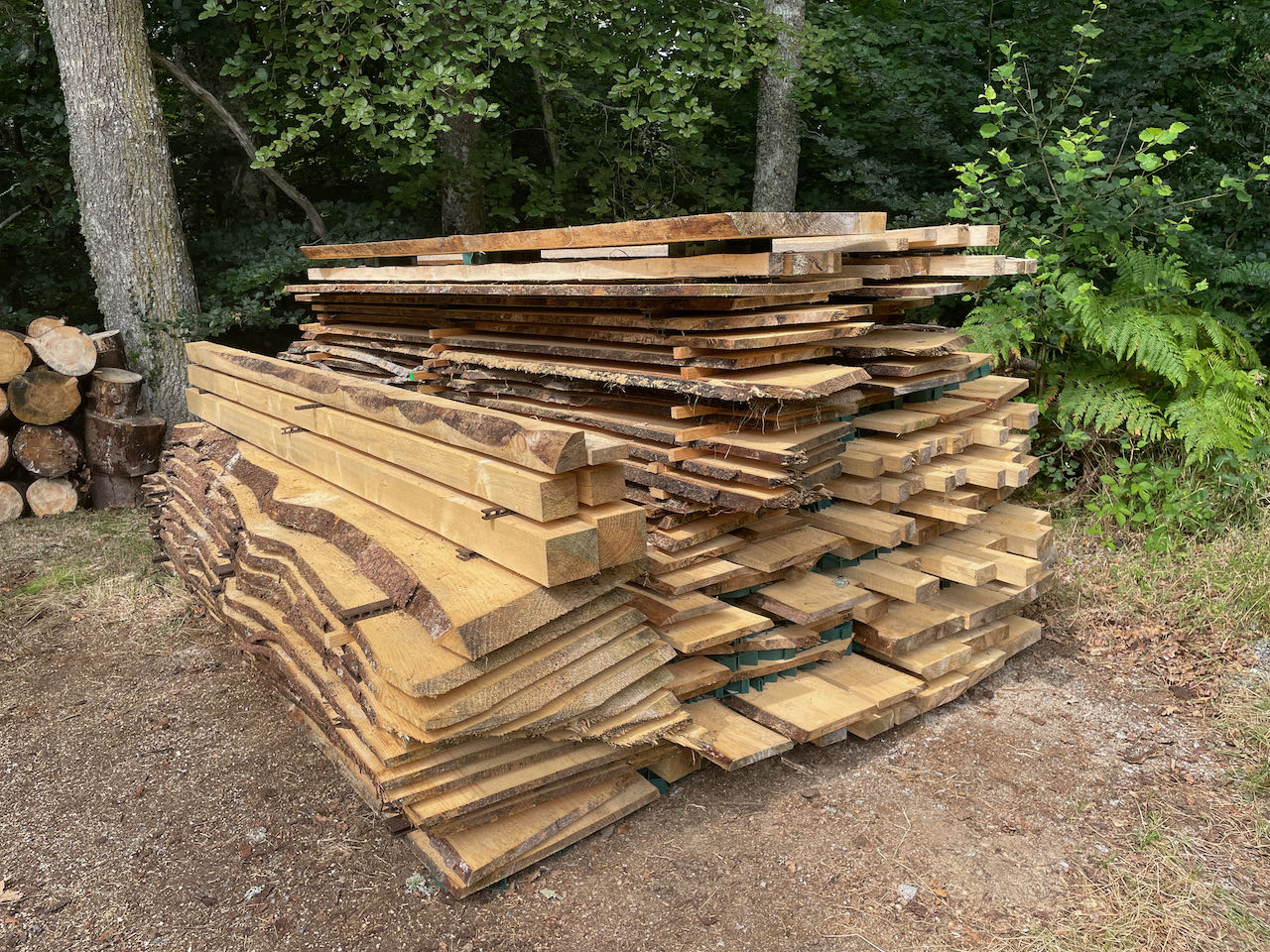 The conifers planking is at the final stage. Nick came during week two to mill the wood which had been stacked by Sappajou. This was stacked initially by Ritz but we had to restack because of drying out. V&T helped make stickers out of plastic left-overs and they also helped stack the planks. Ritz and I cut up the burning wood into 50cm and stacked. This will be good burning wood in 5-7 years. 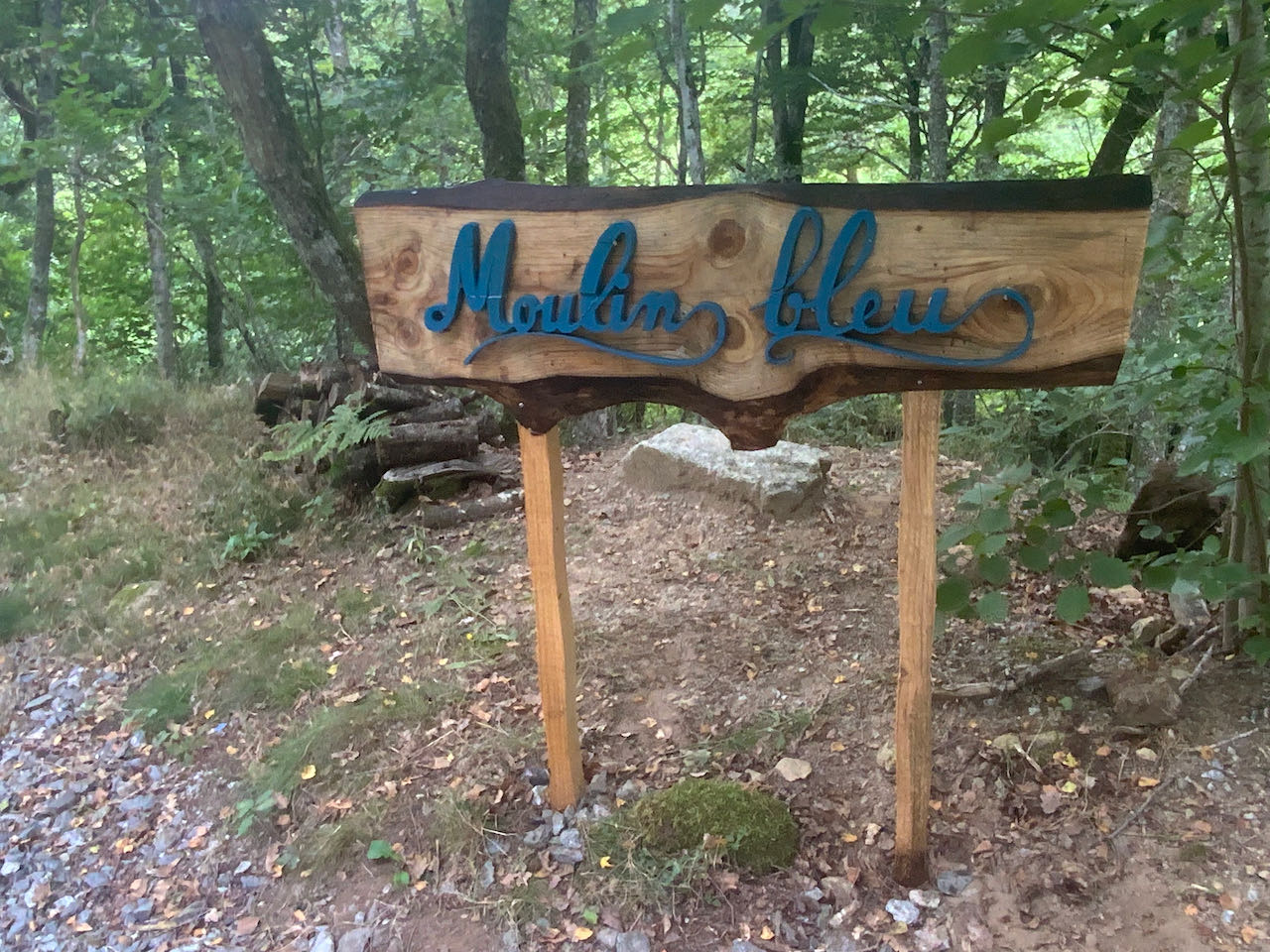 We have been informed (Feb 21) that we are called Moulin de Lascaux-Maury. We understand this is a nationwide attempt to give everywhere a formal address. Since Feb 21 we have been trying to ask the Mairie how the name came about considering there is another Moulin de Lascaux-Maury on the D992 and the French IGN carte says this is so.  That mill, according to the Mairie, is apparently called Moulin de Chateax. We went to the mairie and asked them where the information came from and got a shrug of the shoulders in typical French style. They could not say where the name came from officially. Still baffled!! So now officially the Moulin de Lascaux-Maury but it will always be the Moulin Bleu! 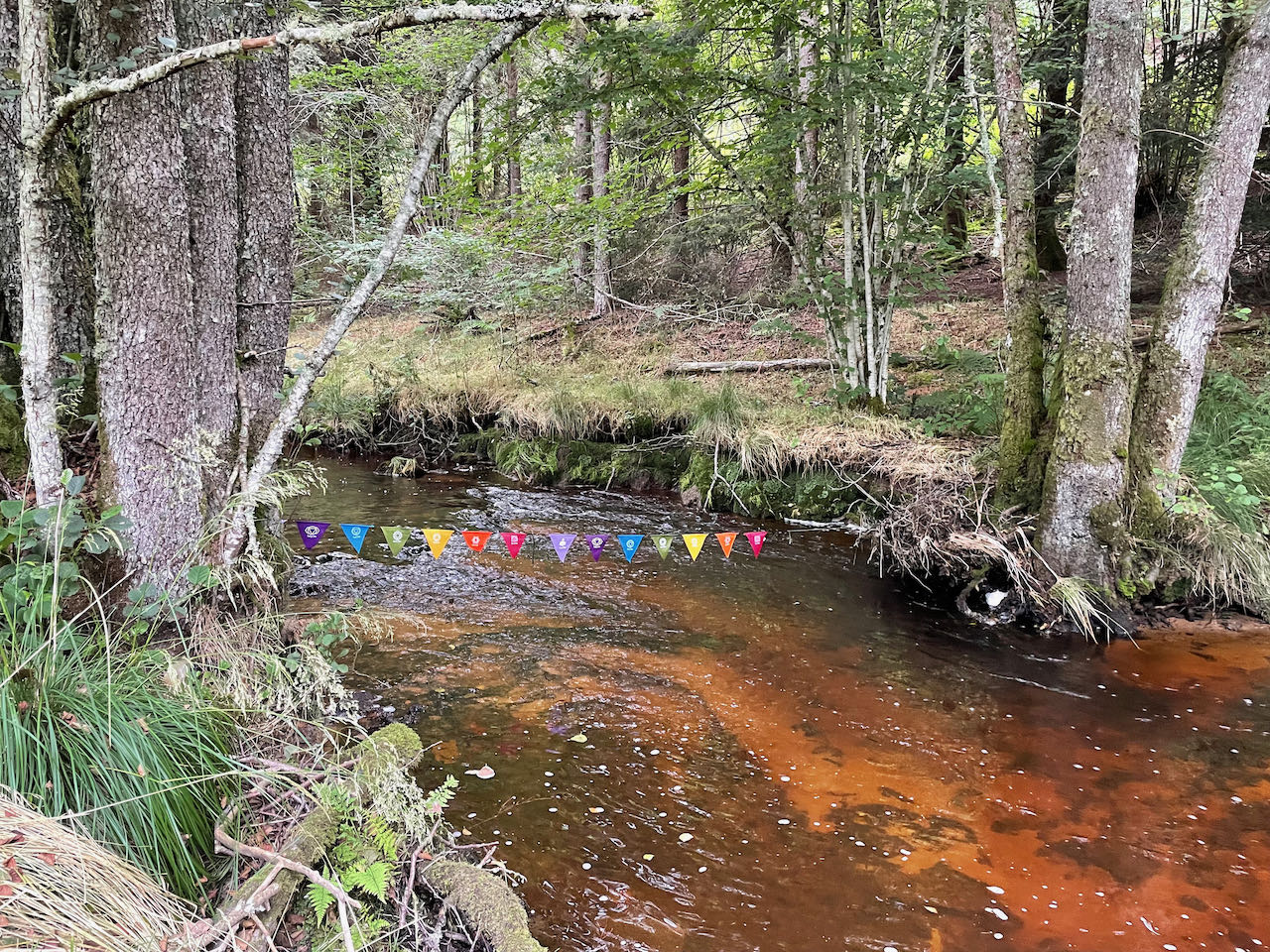 In aid of the Brainstrust charity we organised and ran a duck-race raising over £2000. We numbered a coloured 48 ducks and let them loose in the river. The first one over the line won a prize donated by RiverLife Therapy. It was good fun but the river was cold for Ritz and Vinne who both went in and retrieved 4 stranded ducks. 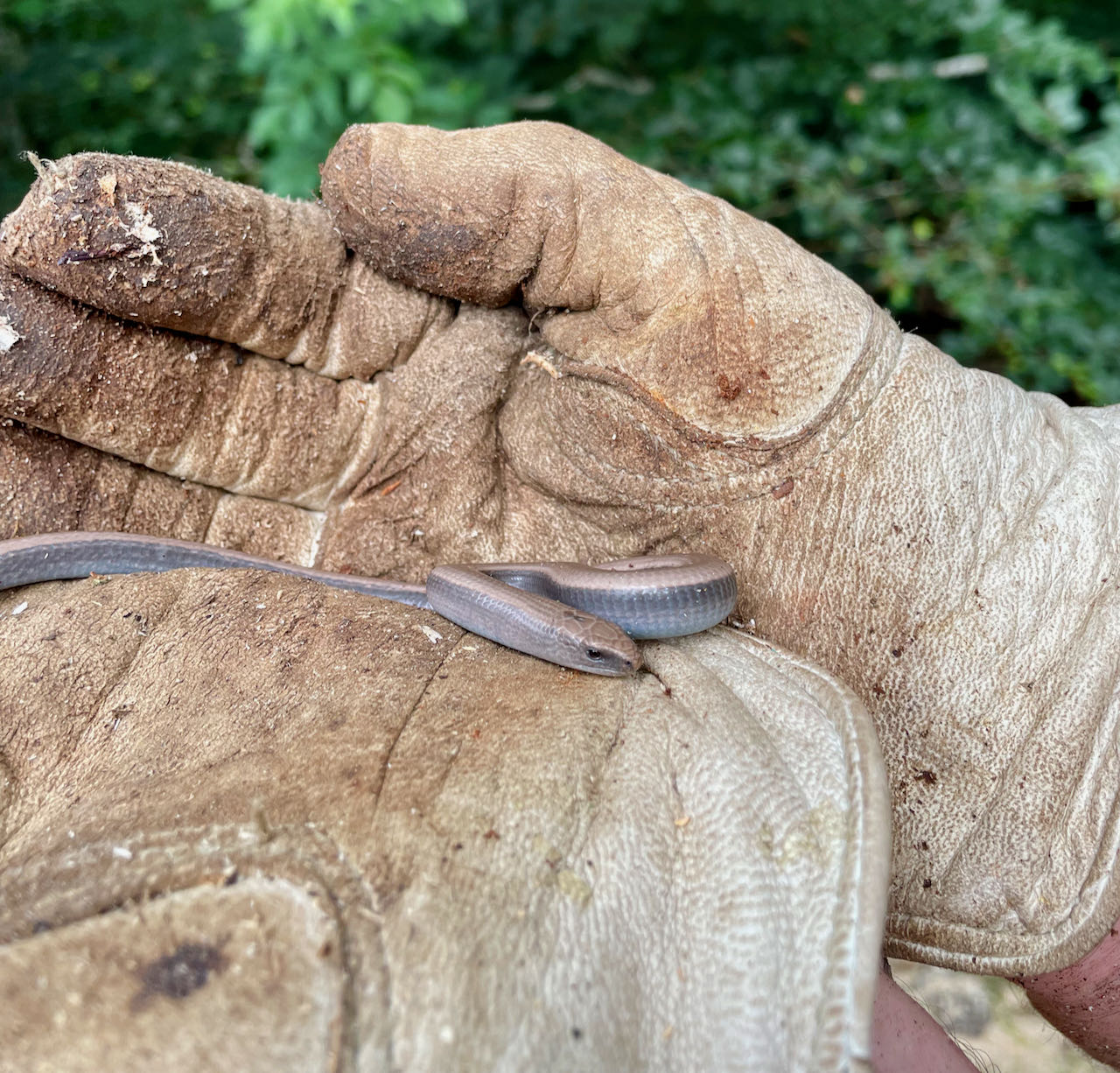 Lizzards are prevalent this year as are the normal wildflowers. Not so many ticks. Perhaps this is because of the garden and land management. All the tits came back after I filled up the bird table food of peanuts and fat-balls. Camberwell beauty and silver-washed fritillary made constant appearances and a visit by a purple emperor. A white-clawed crayfish was seen in the river. Plenty of roe deer on trailcam but not so many boar. I’ve seen otter tracks down by the river but they were quite old. Red deer are still around the periphery. While moving the planks we disturbed a juvenile slow-worm and three female stag beetles. 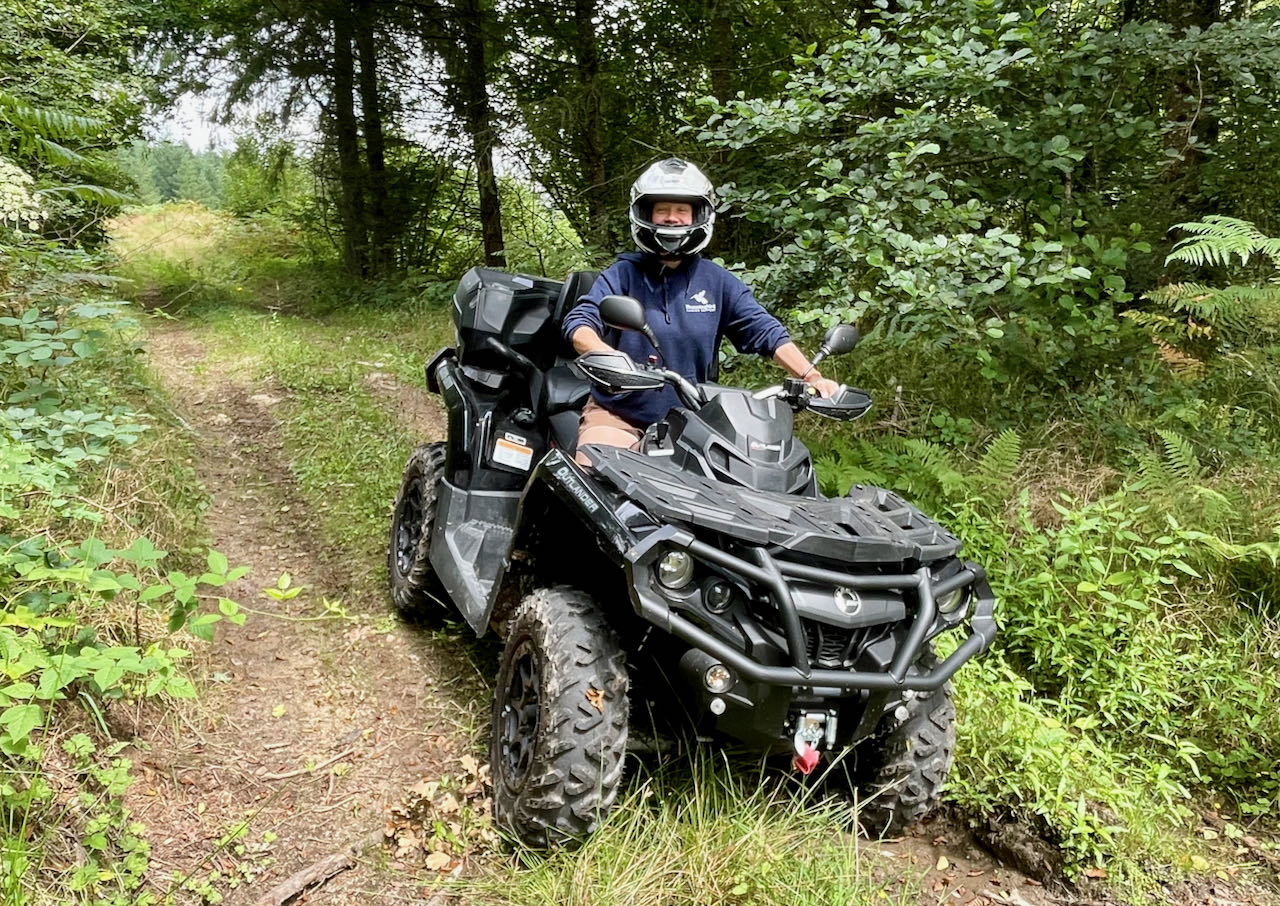 Finally – a solution for the long drive-way. I often joked that this would be an ideal solution but we were put off by the price and the inflexibility by only be able to drive on the property. We heard from friends in the vicinity that a family were returning to the UK and was selling all his kit including a quad. We went around and spoke to him. Cutting a long story short he wanted to sell but as a last item before they moved back. We also thought twice as this was an incredibly powerful machine designed to go on-road as well as off road. After a bit of thought we considered this ideal as we could use the quad as a fun machine outside the property and potentially street legal as well as a utility vehicle on the land. We made the deal – it still wasn’t cheap – but it had hardly been used because they had returned to uk for the Covid lock-down for a year. He also offered a garden trailer which we also bought, which is ideal for moving stuff about the property.

The obtaining of insurance and the bureaucratic  French paperwork wasn’t actually too bad. The insurance was obtained and we went to Gueret in-person to get the registration changed. Two days later the document, a carte gris, arrived in our post box.

It’s an amazing machine. For those who want to know it is a Canam Outlander Max XTP 1000. That will do! The quad is safely secured at another location while we are away.

It was wonderful to see our friends Tracey and Vinnie return to the mill. Without their help and assistance we would have struggled with the duck-race and re-stacking the planks. They stayed at Cuckoos end in a tent. We had a film show and BBQ on their last night which was awesome. 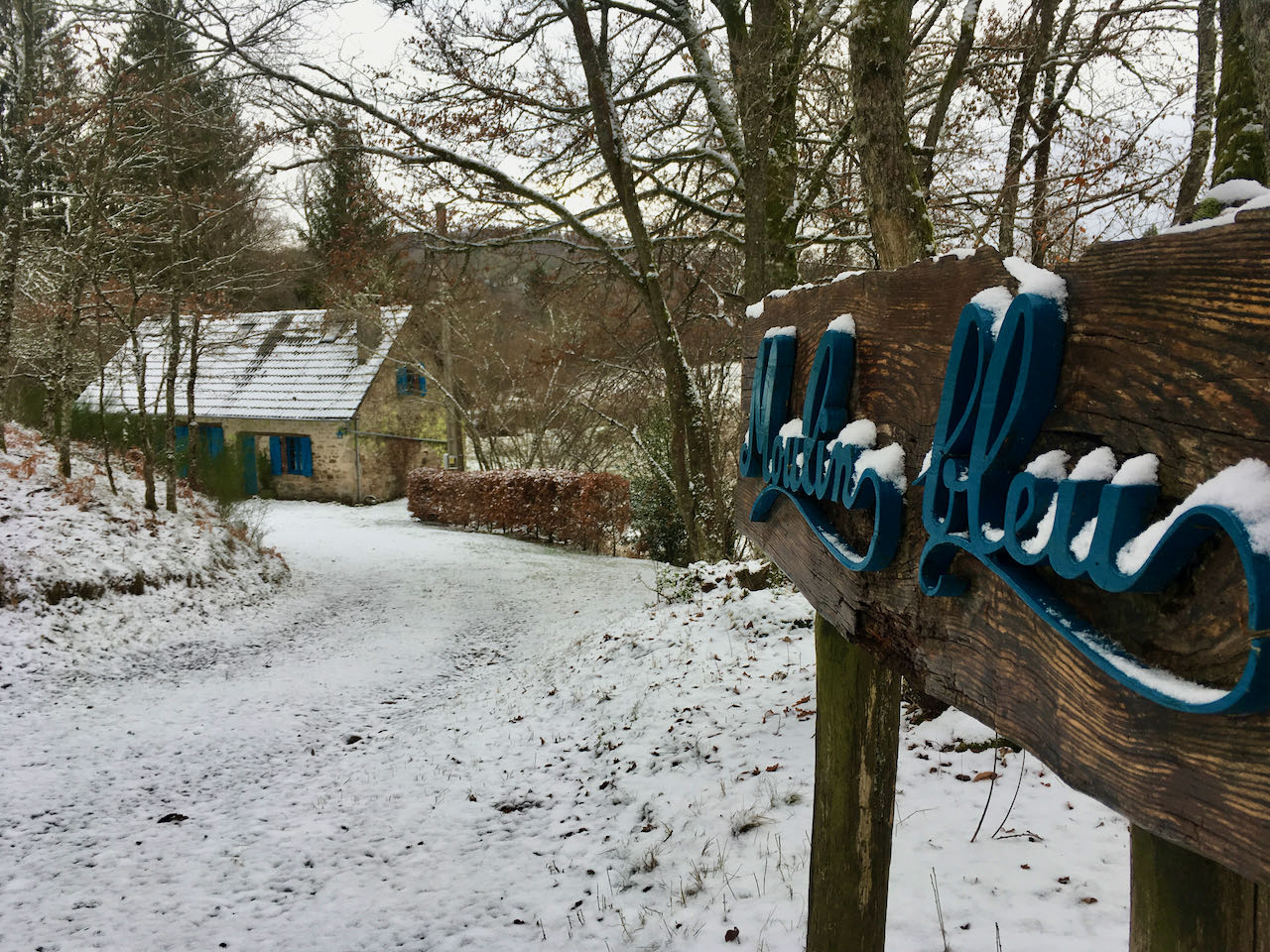 Lots of work this trip!

Having started the outhouse build in October last year, our builder failed to finish the outhouse job. Most of the build has been completed. The plumbing and shower, toilet and electrics were all working but the stone walls were incomplete.

When we arrived on Tuesday 15th December, we didn’t realise what a mess it was!

Tony, from A Horrocks and Son, stepped into the breach and came to finish the job. He and Connor, his son, made an excellent job. They also made some kitchen improvements for us and fitted a decking platform to the side of the Mill which has utterly transformed that space, providing us with a Yoga and Massage platform over-looking the river and field which also serves as a wildlife viewing area and outdoor dining area.

Another guy called Chris came to remove the spoil and sort the rocks and stones into different sizes. A lot of spoil was placed on the plateau to enlarge the area and the bigger rocks and stones were tipped over the plateau which will go to make a folly (yes – a folly!) The medium and smaller sized stones will be used to make a (large) rockery.

Our conifer project had a bit of a hiccup last year but the upshot is that we have a large number of 3m logs ready to be planked and used for various projects in the pipeline.

We also tried to log up a large, felled oak. Half way through the chainsaw failed so we decided to leave that to the experts next summer.

It was a white Christmas at the Mill. Even though there was a lot going on and loads of pressure and stress it was a magical time. It didn’t stop raining after that for 2 weeks. Temperatures also plummeted to minus 7C. However, towards the end of the trip we were in short-sleeves with sun cream on.

Because of the current COVID situation we decided to stay longer through the whole of February.

The bird tale didn’t show many results this winter the same as laster winter. It’s all a bit quiet. Robin, chaffinch, blue, great tits, long-tailed tits, willow tit and the occasional GS woodpecker. We saw voles around the new rockery and in the garage and of course the ever-present moles. When stacking logs in the garage we inadvertently disturbed a whiskered bat. We placed him back in the eaves but he was gone a couple of days later. We also discovered a mummified smaller whispered bat under the bedroom steps.

We saw two two deer one evening at 6pm at the top of Mill woods which was a great sighting.

Early spring cyclamen was spotted all over the land at the end of the trip. The sunny and warm days brought out brimstone, peacock, and fritillary. Other plants seen were snow drops, common violet and mouse-ear.